For over a century, Parker County, Texas has been noted for its excellent quality of watermelons. T.A. Willhite began growing melons in the 1900s around Poolville, in the northern part of Parker County. It was in 1904 that this county first achieved distinction by winning first prize for both the size and quality of its watermelons at the World's Fair in St. Louis, Missouri. About a year later, friends suggested that Mr. Willhite start selling seed. He sold a few melons that year and 77 pounds of seed. From that humble beginning, Willhite Melon Seed Farms began.

Mr. Willhite originally operated the business in a building at his home, but as business grew, he moved into the First State Bank of Poolville office, which had closed during bad economic times. During this time, “Tom Watson” and “Stone Mountain” were popular varieties of watermelons. Mr. Willhite passed away, and his daughter, Miss Clara Lee Willhite became owner and manager in the 1940s.

This was a period of growth for the company during which Miss Clara expanded the business not only from coast to coast, but also worldwide. She continued as owner and manager until her death in the 1960s. Upon her death, the business was acquired by two of her employees, Vaughn Mader and Gene Hodges. They continued the Willhite tradition and later sold the business to Dr. Lee C. Coffey in 1969. Dr. Coffey expanded the product line to carry a more complete line of garden vegetables and other supplies. Melon varieties continued to be developed and improved and a hybrid breeding program was begun. 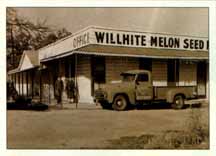 On September 1, 1994, Willhite Seed Company became Willhite Seed Inc. Willhite continues today as a family owned business with the same friendly personnel whom you have dealt with throughout the years. Robyn Coffey, Dr. Coffey’s daughter and successor, is president and shares the same love of watermelons that her father had. Don Dobbs, general manager who recently passed away, had been with the company since November 1962. He had extensive knowledge of the many aspects of watermelon growing, “…both the science and the art.” To many in the industry, Don will forever deservedly be known as “Mr. Watermelon.” Don leaves a void in this company and the seed industry in general that none other can ever fulfill. Our office manager, Carole Clark, came onboard in 1975 and excels at customer service.

As many new challenges face the seed industry and our nation in general, Willhite Seed remains committed to our historic standard of excellence. Our roots are firmly planted in our heritage while our eyes are focused on the future. We pledge to maintain our dedication to our heirloom varieties of seeds, especially our widely acclaimed watermelon seed lines. We further pledge to continue our efforts to develop and perfect new and superior varieties going forward. We appreciate our long term customers and our new buyers as well; so in order to provide you with more of what you like about Willhite Seed, we are beginning a program geared toward improved interaction between each of you and all of us here at Willhite Seed. In order to help us serve you better, we would greatly appreciate you taking a few minutes to answer the following few questions:

• What you like about Willhite Seed, and certainly anything that you do not like or do not clearly understand;

• What you would like to see in the future from Willhite Seed;

• What we can do to serve you better;

• What we can do to help you with your gardening undertakings - whether they are backyard hobby undertakings or mainstay commercial growing operations.

In order to reach us with your thoughts, comments, and recommendations please contact us as follows:

“Thank you all for helping Willhite Seed maintain a prominent role in the seed industry for over a hundred years!”

Want to give the gift of growing? Purchase a Gift Certificate for your favorite gardener! 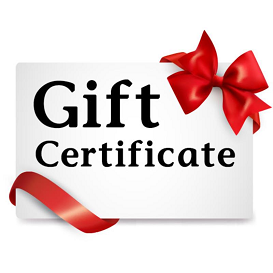